The Nerd struggles to be a true hero, as he looks to tackling a console version of a classic game – Dragon’s Lair for the NES. This is Angry Video Game Nerd Episode 37.

First released on laserdisc in 1983, Dragon’s Lair marked a revolution in arcade gaming. Rather than sprite-based graphics, the game was designed entirely in full motion video (FMV) and was controlled through the player making decisions at certain points to determine Dirk the Daring’s fate. The game was a massive success, and reported grossed over $32 million by 1984.
Dragon’s Lair had many spin-offs and ports in the following decade. It was ported to many home computers with most of the animations intact, and received a sequel called Dragon’s Lair II: Time Warp in 1991. However, in 1990, the NES and SNES both received a very unique version of Dragon’s Lair. Due to the memory limitations of the consoles, the game bore no resemblance to the arcade version and instead took the form of a platformer. This port holds a reputation for being punishingly difficult due to slow control and no checkpoints.
In this episode, the Nerd teams up with Dirk the Daring to defeat the dragon, cross a drawbridge, and open a door. While facing down these legendary challenges, we explore the philosophy of being trapped in a pool of piss, what purpose Dirk’s health bar serves, and how to kill a dragon. When it’s all said and done, we may even get to see the second screen of the game, too. 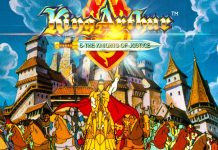