Video Sponsored by Ridge Wallet:
https://www.Ridge.com/CINEMASSACRE
Use Code “CINEMASSACRE” for 10% off your order

In this episode of Cinemassacre’s Rental Reviews, Justin and James review Drop Dead Fred from 1991. An unhappy housewife gets a lift from the return of her imaginary childhood friend, Drop Dead Fred. Rik Mayall starred as the title character: a happy, anarchic, and mischievous imaginary friend of a young girl named Elizabeth (Phoebe Cates) and nemesis of her overbearing mother Polly (Marsha Mason). He causes chaos around her home and neighborhood, but nobody can see him except her. When she grows up and has an emotional crisis, he returns to “cheer her up” in his own unique way, causing more chaos than ever before. The supporting cast included Carrie Fisher, Ron Eldard, Tim Matheson, and Bridget Fonda. 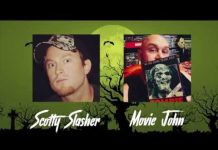